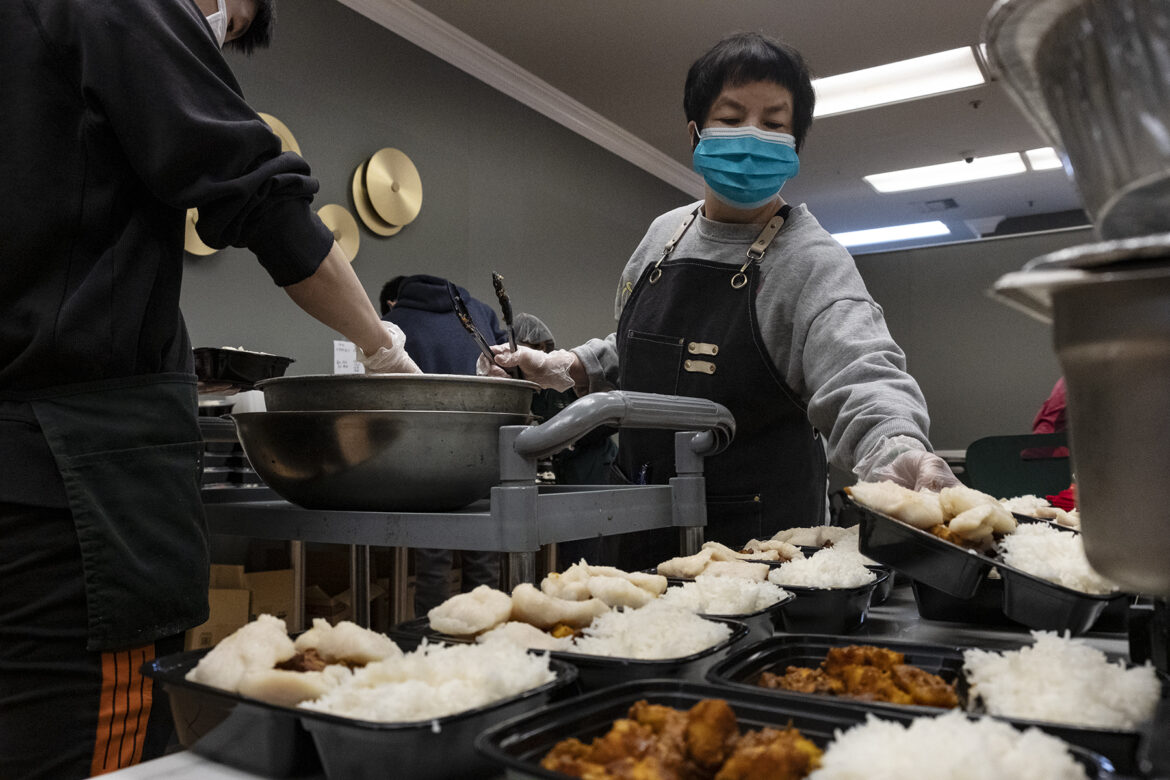 On a sunny weekday morning in March just shy of the one-year anniversary of San Francisco’s shelter-in-place order, Brian Fernando, the chef and owner of the Michelin-rated modern Sri Lankan restaurant 1601 Bar & Kitchen, was in a rush. He and his only colleagues still working at the restaurant — his wife and one line cook — were busy transferring 105 individual brown paper bag lunches to the trunk of his car. He would then drive them from western SoMa, where his restaurant is located, to Lombard Street, the site of that day’s delivery. The lunches they had prepared were not the restaurant’s typical Sri Lankan-inspired dishes sourced from the foods of his childhood but, as requested by the community-based organizations working to feed residents facing food insecurity, “American comfort food.”

[Reporter Sonia Paul guest-hosted our daily podcast and radio show, “Civic,” this week, interviewing restaurateurs and nonprofit leaders working to save small businesses while addressing hunger. Listen to the three shows on this page or subscribe to the podcast.]

1601 Bar & Kitchen is one of 189 small restaurants working with the pandemic-born nonprofit SF New Deal. Spearheaded by Jacob Bindman, the group’s director of operations, and Lenore Estrada, CEO of the pie-baking business Three Babes Bakeshop, SF New Deal is a grassroots organization that sourced seed money from philanthropy — a $1 million investment from Twitch CEO Emmett Shear — to employ restaurant workers to feed the hungry. The nonprofit serves as a direct-services mediator between restaurants and community-based organizations that have long been doing the work of feeding vulnerable populations, and it continues to add restaurants to its roster on a rolling basis.

But as the coronavirus vaccine rolls out and San Francisco’s commercial eviction moratorium extends at a piecemeal rate — it was scheduled to lift at the end of this month but has now been extended to meet the duration of California’s commercial eviction moratorium through the end of June — questions about the future of SF New Deal and similar programs, and the future of the city’s restaurant industry, are becoming louder.

Organizers in the restaurant industry, including SF New Deal, are well aware that food insecurity is a symptom of a much larger rot — poverty and systemic racism — and that the restaurant industry was in crisis before the pandemic. It is one of the largest employers in the U.S. yet pays the lowest wages out of any industry, according to the Bureau of Labor Statistics. Restaurant profit margins are slim. Workers already driven out of San Francisco because of its high rents can barely afford to work in the industry.

Against this context, the restaurant industry has suffered more than any other sector in the pandemic. The National Restaurant Association found that as of Dec. 1, 2020, more than 110,000 eating and drinking places in the U.S. had closed either temporarily or for good, and that 2.5 million restaurant jobs had disappeared. In San Francisco, 112 restaurants have shuttered, according to a non-exhaustive list compiled by The Infatuation. The Small Business Administration recently announced it would roll out the $28.6 billion Restaurant Revitalization Fund grant program, part of Congress’s recently passed American Rescue Plan Act of 2021, within 30 days, although the exact details on when and how restaurants can apply for direct aid are still unclear.

Struggling restaurants, meanwhile, are hanging by a thread. The California restaurant industry employs about 1.6 million people, according to the Bureau of Labor Statistics, making it one of the largest private-sector groups in the state, and sales from the California restaurant industry generated an estimated $97 billion in 2018, according to the National Restaurant Association. A recent report from San Francisco’s Budget and Legislative Analyst’s Office — based on data from a number of real estate reports and rent surveys — estimates that from April to December 2020, the retail sector, excluding hotels but including restaurants and bars, may have accounted for 89% to 98% of unpaid commercial rent in San Francisco, and that the total amount of unpaid rent from all retail properties may be between $18.5 million and $39.8 million per month. The city instituted a commercial eviction moratorium in March of 2020, soon after it announced shelter-in-place orders.

“Our expectation is that SF New Deal alone is not enough to keep small businesses afloat, but what we’ve heard is that for the majority of the businesses participating, it is enough to close the gap.”

The city allocated about $46 million to address COVID-19-related food insecurity, and SF New Deal is one of a few nonprofits the city is supporting in this response, said Shireen McSpadden, executive director of the San Francisco Department of Disability and Aging Services. While San Francisco has an overall policy to support organizations that distribute food in the community, McSpadden said circumstances will change as more workers go back to their jobs, kids go back to school and older adults return to senior centers.

“Right now, our thought is that we will be scaling back a little bit in the next fiscal year, on some of this food support,” she said.

In addition to government contracts from the city, private donations also help to keep SF New Deal funded. This in turn allows the nonprofit to distribute anywhere from $6,000 to $8,000 a week to each participating restaurant for a minimum of 12 weeks, Bindman said.

“Our expectation is that SF New Deal alone is not enough to keep small businesses afloat,” he said. “But what we’ve heard is that for the majority of the businesses participating, it is enough to close the gap.”

That is the case for Fernando at 1601 Bar & Kitchen. Neither transitioning to takeout nor setting up outdoor dining were viable options for his business, which he said he believes is the only brick-and-mortar Sri Lankan restaurant in San Francisco. It was always a destination restaurant where patrons paid for the atmosphere on top of the cuisine. Support Fernando has received from SF New Deal is the main reason his business survived the past year, he said.

He has continued to pay all his fixed costs throughout the pandemic including rent, thanks to income from SF New Deal, and has recently requested a rent reduction from his landlord, the Tenderloin Neighborhood Development Corporation. At the time of reporting, the only response he had received was essentially a copy and paste of the city’s commercial eviction moratorium, a policy that is both beneficial and frustrating, he said.

“We’re not making any money, we’re getting the money that we’re supposed to be paying now waived to some later date in the future,” Fernando said. “In the meantime, there’s no means for us to make up for that money lost.”

Fernando gestured to structural damage in the interior of the restaurant from a car ramming into it at the end of last year, which the landlord has yet to repair. He said it is obvious why so many places are closing: The simple arithmetic of what they are earning versus what they owe gives owners few revenue-positive options.

Fernando said he would like to see food support programs like SF New Deal embedded in the larger fabric of the restaurant industry long term, and would be glad to make it a part of his business model. But that does not eliminate the stress of trying to stay in business, or worries about the potential displacement of restaurants once the commercial eviction moratorium lifts this summer, despite a number of rent repayment options San Francisco has instituted that extend beyond June 30.

That points to a burgeoning catastrophe within a catastrophe, and organizers are trying to think beyond the pandemic. While food support programs are a worthy cause, Saru Jayaraman, director of UC Berkeley’s Food Labor Research Center and president of One Fair Wage, emphasized that they do not actually tackle the root of the issues.

“Providing grants to restaurants to feed people for free isn’t ultimately going to make them sustainable,” she said. “What is going to make them sustainable is that people in their communities, in their neighborhoods, can afford to eat out, have the ability to consume and eat out. And ultimately, that requires raising wages and increasing equity.”

Jayaraman is one of the co-founders of High Roads Kitchen, another food program initiated in the pandemic. It offers cash grants to restaurants that commit to participating in the organization’s gender and equity program and providing free meals to the community. While High Roads Kitchen currently has a limited presence in San Francisco, operating in 10 cities nationwide, it started in California. It was launched with the support of Gov. Gavin Newsom.

“Now we’re in conversations with the Biden administration about making it a federal program,” Jayaraman said.

As organizers try to influence the future of the industry, restaurant owners are still reeling over how the past year has reshaped their present operations. Over Hong Kong-style milk tea at Washington Bakery in San Francisco’s Chinatown, owner Chelsea Hung, who took over the restaurant from her parents, said she started observing a difference in the neighborhood back in January 2020. While more people are emerging now, the situation is hardly normal.

“We’ve noticed a huge decline in foot traffic here,” she said. “A lot of it had to do with misconceptions of the virus, a lot of xenophobia and people just avoiding Asian communities.”

Hung, who previously worked in the tech industry, said she had a much bigger appreciation for the sacrifices her parents made to build the restaurant after a roller-coaster year. She has had to lay off and rehire staff, negotiate rent, figure out delivery apps and innovate the menu to offer items people would want in a pandemic, like meal kits for popular noodle soups. SF New Deal is not the only program Washington Bakery is participating in. It is also involved with Feed + Fuel, a program run by the Chinatown Community Development Center.

“I really do hope that this program can be long term or permanent,” Hung said of SF New Deal in particular, and food-support programs more generally. She added that her restaurant also used to serve office workers who may be inclined to work from home beyond the pandemic.

“I hope that as this becomes long term, more restaurants can be involved, because so many restaurants — it’s going to take them years to recover from this,” Hung said. “We’re still currently in this situation.”

Audio segments from our radio show and podcast, “Civic.” Listen daily at 8 a.m. and 6 p.m. on 102.5 FM in San Francisco, and subscribe on Apple, Google, Spotify or Stitcher.