(RNS) — A YouTube video from 2007 captures Hinduism’s rough introduction to the prayer life of the U.S. Senate.

“Today’s opening prayer will be offered by our guest chaplain, Mr. Rajan Zed, of the Indian Association of Northern Nevada,” says Pennsylvania Sen. Bob Casey, who was serving as the presiding sergeant-at-arms that day, in the recording, made in July of that year.

Rajan Zed, an Indian immigrant who lives in Nevada, is seen dressed in a salmon colored robe and a saffron scarf, with prayer beads around his neck. Before he has a chance to speak, another voice sounds out from the Senate’s public gallery.

“Lord Jesus, forgive us Father for allowing the prayer of the wicked, which is an abomination in your sight — ”

Casey cuts off the protester with the gavel — “The sergeant-at-arms will restore order in the Senate!” — but another voice echoes out: “We shall have no other God before you, you are the one true American God!”

Zed, looking perturbed, starts again. “Let us pray. We meditate on the transcendental glory of the Deity Supreme —” he gets out, before a woman’s voice is heard yelling. The sergeant-at-arms intervenes yet again, and this time Zed is able to finish.

This scene began Zed’s decade and more of representing Hinduism in legislative bodies.

In the 12 years since Harry Reid, then Senate majority leader, invited him to deliver the first Hindu invocation in Congress, Zed has offered Hindu prayers before 17 other legislative bodies, including in Nevada, California, New Mexico, Arizona, Utah and Alaska.

Zed’s one- to two-minute blessings, like those by chaplains of other faiths, are meant to appeal to a broad American sense of civic spirituality while respecting the separation of church and state. They are usually uncontroversial, though earlier this month some Republicans in the North Dakota House of Representatives went to the back of the chamber to protest Zed’s invocation. “I don’t want to be compelled to pray to a false god,” Rep. Jeff Hoverson told The Associated Press.

In a country where minority religions are routinely misunderstood and vilified, one can view Zed’s efforts to present Hinduism in the public square as admirable. But the origins of Zed’s reputation as a spokesperson for Hinduism also raise questions about who gets to speak for the religion, or any minority faith in the United States, and why. 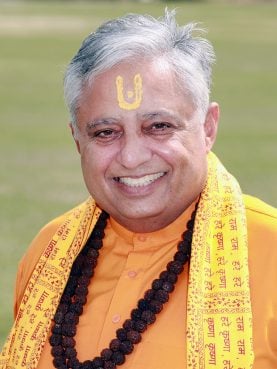 Rajan Zed is Indo-American and a Hindu cleric, known for his interfaith advocacy. Courtesy photo

As with Islam and Buddhism, Hinduism’s decentralized structure often means that the loudest voices are often taken to be authoritative. One of Americans’ first visions of Hinduism came when Swami Vivekananda, a Hindu monk, spoke at the World Parliament of Religions in 1893. Vivekananda was one of several swamis — Paramhansa Yogananda, Swami Satchidananda and Srila Prabhupada are others — who traveled to the West to spread their spirituality in the early 20th century. Vivekananda’s sermons were also primarily aimed at fundraising for social welfare programs back in India, said Michael J. Altman, an assistant professor of religious studies at the University of Alabama who has written about the history of Hinduism in the U.S.

To make the faith digestible to his audience, Vivekananda framed Hinduism as comparable to monotheistic traditions such as Judaism, Christianity and Islam. Before his speech, most Westerners understood the “Hindoo” as a person from the distant, exotic land of India. “Hindu,” the adjective, described a philosophy based on some sort of text but not necessarily as a religious system, said Altman.

It wasn’t until the Immigration and Nationality Act of 1965, which brought a generation of skilled labor to the U.S. from India and other Hindu nations, that Americans found themselves working with Hindus, or drove past a temple on their way to work. Even then, these immigrant communities were less eager to explain their faith than to fit into American life.

Some point to 9/11 as the watershed that propelled Hindus (not to mention Muslims and Sikhs) to educate the public about their tradition, if only to avoid being lumped in with the terrorists who were triggering curiosity, fear and conspiracy theories.

But according to Suhag Shukla, executive director of the Hindu American Foundation, founded in 2003, the Hindu community had long needed an advocate to address misrepresentations of Hinduism in the media, largely because journalists had few sources in the Hindu community.

“Stakeholders and members of the community … were not the spokespeople for their tradition,” said Shukla. “Academics or anthropologists and other people were speaking on behalf of Hinduism, as opposed to Hindus.”

In 2014, an Indian publisher withdrew the scholar Wendy Doniger’s book “The Hindus: An Alternative History” because of an uproar over its portrait of the faith. Since 2005, middle school textbooks used in California have outraged some Hindus with the texts’ history of ancient India and South Asia, a debate that remains unsettled.

Amid these struggles to articulate what Hinduism’s religion, culture and identity stand for, Zed, who goes by the title president of the Universal Society of Hinduism, has emerged as a clarion voice, even as members of the HAF and Sadhana, another Hindu advocacy organization, say they know little about him. Rather than focus on education, policy or social justice, Zed seems centered on representing Hinduism through prayer in legislative bodies and campaigning against the commodification of Hinduism and Hindu symbols in American culture.

These campaigns show Zed’s flair for making news. He inveighed against and received apologies from REI for the outdoor store’s yoga mat towel featuring an image of Lord Ganesha. Ditto a Virginia brewery for naming a Spanish milk stout Hanuman, the name of the Hindu god of celibacy, and an Ohio brewery for affixing an image of Ganesh on a beer label.

He routinely demands that Amazon remove the sale of apparel featuring Hindu gods, goddesses and symbols. He has insisted that U.K. crematoriums have Lord Shiva shrines and Hindu worship rooms. And he has urged the Bank of Canada to produce “beef-free bank notes” (Canadian paper currency is said to contain traces of beef or mutton tallow.)

The assumption of vegetarianism within Hinduism, however, is an example of how a singular account can take hold when just a few people represent an extraordinarily diverse community. The notion that vegetarianism is a core tenet of Hinduism is inflated, likely due to “cultural and political pressures”within India, according to recent research. While several Indian states have banned the slaughter of cattle, especially since the appointment of India’s ruling Bharatiya Janata Party in 2014, vegetarianism is mostly linked to more affluent Indians and some upper caste Hindu diets.

Shana Sippy, an assistant professor at Centre College in Danville, Ky., who studies the Hindu diaspora, cautions that outrage campaigns can foster an overly simplistic narrative. What is offensive is “personal and contextual,” she said, pointing out that the gods Krishna and Lakshmi are on butter and rice packages in India.

“Expressing discomfort with a representation is different than saying, ‘You need to pull those things off the shelf,’” she said. “I think we walk a fine line between questions of censorship and freedom of speech.”

How Zed views his work, or the mission of the Universal Society of Hinduism, is not clear.

Over the course of nearly a month of email exchanges with Religion News Service, Zed repeatedly declined an interview, citing his busy schedule. After forwarding a press release (which several outlets have published word-for-word) and an enormous photo of his smiling face, he suggested he’d answer emailed questions. He never responded to an email posing four questions.

The barebones website of his society states that it “started in the mind of the Hindu statesman, Rajan Zed.” There’s no sign of professional staff, a physical presence or, despite a “donate” button, whether it is for profit or nonprofit. Its Twitter and Facebook accounts haven’t been updated since 2013.

There’s no doubt his schedule is packed. Zed’s Twitter and Facebook profiles are peppered with pictures of him meeting people around the country, his arms typically crossed over his belly while he’s dressed in saffron wear. But Zed’s background and how he supports himself to fly around the country for such meetings remain a mystery. Delivering invocations is a volunteer opportunity.

The process for scheduling such invocations usually starts with an email callout, and Zed responds to them even if they are out of his area.

“I was kind of surprised that he was coming all the way here to do this, but at the same time, that’s how he wants to spend his time,” said Patty Moore, the office coordinator at the Washington House of Representatives, where Zed gave the opening prayer not long ago.

Julie Fullmer, mayor of the city of Vineyard in Utah, described chatting with Zed over drinks at Starbucks and learning more about the festival of Holi. She was excited he wanted to offer an invocation because she wants the city to be more inclusive. “If people want a prayer or if people want to share something, we allow the public voice to speak,” she said.

Richard Wyatt, a pastor in North Dakota who coordinates the state’s chaplains, said he doesn’t do background checks on them. “I have to take them at face value that they are who they are,” he said.

While most legislatures and councils welcome Zed, some commentators have pointed out the grandiosity of one person’s claiming to speak for the world’s 1 billion Hindus. In a teasing headline in 2013, Gawker dubbed Zed “Hindu-in-chief.”

“The honest truth is that the way that the Hindu tradition has historically developed and been understood in and outside India, it doesn’t lend itself to that sort of easy characterization,” said Udit Thakur, a board member of Sadhana, which is founded on the principles of faith in action. “There isn’t one authoritative voice of Hinduism. I don’t think that there really should be.”

This story originally published on April 10, 2019, at the Religion News Service.